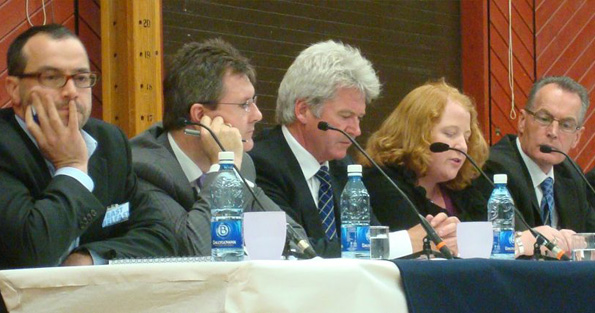 While James Smyth claims not to know what a blog is, he knows all about community. Along with three others, he came up with the idea of East Belfast Speaks Out – an open forum for members of the public to come along and put questions to public figures. Over 130 people, young and old, turned up at Ashfield Boys High School this evening to hear local politicians, a shadow NI minister and the local head of Amnesty answer their questions.

Stimulated by “(the hugely successful) West Belfast Talks Back moved to the Holywood Road”, the organisers’ aims were:

To provide access to leading politicians to discuss issues of general concern to the public.

To encourage active participation in the political sphere from a cross-section of what can be seen to be a currently disappointed electorate/population.

The first bit of tough talking came from warm-up man Tim McGarry who had escaped his usual Hearts and Minds taxi for the evening. His biggest laugh came when he pointed out that Pope Benedict XVI and Ian Paisley are the same age. (Paisley’s senior by a year and ten days.) But if the Pope had a son it’d hardly be more embarrassing than Ian Paisley Junior!

The HET discussion led on to talk about the costly Bloody Sunday inquiry, the issue of truth, Gerry Kelly being very open about his past (which didn’t someone sitting at the back reading out his criminal history as part of a question half an hour later), and a suggestion from the floor that it was about time Gerry Adams admitted being a member of the IRA. Patrick Corrigan commented:

“I think there are people up on the hill, at Westminster, in the MOD, in all arts and parts, who don’t want the truth coming out.” Perhaps in another preview of what effect a Conservative government might have on Northern Ireland, Laurence Robertson felt that there was a strong case for NI to be an “enterprise zone”, with a reduced corporation tax to attract business.

The 11-plus got a brief airing in a question from a school girl. We discovered that Gerry Kelly failed his and Naomi Long passed hers. Her view is that regulated selection is better than this year’s unregulated selection, and that a practical solution would be to regulate selection for two years while all party talks were held to resolve the issue.

PUP Councillor John Kyle (“the gentleman in the red tie”) asked about the City Airport runway extension. Jeffrey Donaldson admitted that he had lobbied the environment minister (Edwin Poots or Sammy Wilson before him?) on the merits of holding a public inquiry. There needed to be a complementary strategy for Belfast’s two airports, offering proper competition with Dublin airport (which takes 30% of NI’s flying passengers). He felt that the runway extension was more about Ryanair trying to knock Aer Lingus out of Northern Ireland.

The evening rounded up with an unexpected mention of NAMA. If some of the Titanic Quarter debt ends up in NAMA, would the politicians on the panel lobby to change the TQ scheme whose 8000 apartments no longer look attractive to use it instead for a multi-sports stadium? Jeffrey Donaldson liked the idea, but thought there would never now be agreement around a multi-sports stadium.

It’s interesting to make the inevitable comparison between tonight’s community-organised panel and the Northern Ireland Assembly roadshow that was held in East Belfast last week. There was some overlap in the questions asked and topics covered. One overlap in the invited panel too.

In terms of public engagement with elected politicians, 130 people turned up tonight (with no refreshments) versus 50 last Tuesday (with the promise of tea/coffee). Perhaps the only disappointment was that there weren’t more students in the audience. But the organisers’ two aims were certainly met.

East Belfast Spoke Out ... quietly and without incident. But they spoke. And perhaps it’ll spread.